About Darwin’s theory and the evolution of species

Alavi Sereshki, has spent his life studying the philosophy of the new and old West. He has researched the new and old philosophy of the West for more than fifty years. Regarding Darwin’s theory, he writes that the theory of the struggle for survival (of the fittest) about food, etc., cannot justify the order and perfection of living organs.An example is the changes in the life of a silkworm when it is inside the cocoon and does not need wings, it is winged. And, birds are also winged during their existence in the egg or uterus of the mothers, where do not need wings. Also, other animals in the mother’s womb that do not need hands, feet, eyes, ears, etc., have got them. And also, the emergence of animals in the womb from a single cell and their evolution in the mother’s womb cannot be attributed to Darwin’s survival of the fittest. Because in this survival conflict there is no survival conflict between the cells produced according to exponential division. And Darwin’s theory is a paradoxical theory. Any theory, whether in the “empirical or philosophical sciences”, etc., that leads to paradox is a false theory. It should not be taught in academic centers around the world. The teaching of this false Darwinian theory in the academic centers of the world is only welcomed the demand of the Western materialist imperialist system, and that is all!

Concerning Postmodern Theory, it is a false theory that they think we have no “fixed intellectual principle”. Because in “pure intelligence”, the “law of non-contradiction” impossibility and the “principle of causality” (no accident is possible without a cause) is one of the fixed principles that every rational person believes in. And if someone believes in an accident for no reason, he is considered stupid or insane by the wise. In “practical intelligence”, the principle of “the necessity of keeping the covenant” is an intellectual principle. Also, it is necessary to fulfill a covenant to which the obligee has been, firstly, wise and, secondly, free to choose that covenant. And no one has threatened or coerced him to make that covenant. Therefore, the covenant of a madman, a fool or a child wisely does not have to be fulfilled. And these principles underlie the covenant and the necessity of fulfilling it. Actually, it is not true that it (fulfilling the covenant) is a contract. Because the claim, that it is contractual, leads to the “infinite regress”. (This is because the validity of all contracts is due to the principle that they must be fulfilled. Thus, this principle has either been accepted as a rational principle throughout history, or has been contracted since the day when all contracts must be fulfilled. If the second case is accepted, for the same contract, the previous two cases are again inevitable. As a result, if the contracts are not rationally and inherently necessary to be fulfilled, it leads to infinite regress.)

Nietzsche and His Contradictions

“Darwin” strongly influenced “Nietzsche” and “Dilthey”, and through them, “Heidegger”, “Gadamer”, and other historians. And it is as if the book “Being and Time” (Book by Martin Heidegger) is also an achievement mediated by Darwin.

Intellect is the ability that makes man superior to other animals. With its help, the “empirical sciences” and the “universal human community” have become possible while some animals have stronger senses than us. They are deprived of the “universal community” and the “empirical and intellectual sciences” simply because they do not have “intellect.”

In short, the requirement of Darwinian Theory, which states that “I, as “the one who make thoughts”, am the set of my imaginations and just material organs,” concludes that I am not a monomorphemic(simple), fixed unit, but a set of unfixed components.

In other words, it means I am just a set of atoms, subjected to the forced physics rules. So, because of this belief, I as “the one with free will”, becomes impossible. But in reality, I am “the one with free will” and also a monomorphemic(simple) fixed unit throughout life. Therefore, can be tried and punished or encouraged based on his past behavior, and has the intellect to judge between perceptions …

“Nietzsche” and the denial of “intrinsic intellectual values”:

“Whatever has value in the present world, has not it in itself, by its nature,-nature is always worthless:-

But a value was once given to it, bestowed upon it and it was we who gave and bestowed!”[1]

We have already proved that we have intellectual and fixed rights, such as the need to fulfill covenants and rights of the mother to take care of her own baby and vice versa, these form the basis of contract rights and none of them are contractual. In Western philosophy, they are known as “Natural Rights”, and according to the “Stoicheiometries”, the rule of common sense and even the intrinsic of intellect. Just as the claim of legislating these (Natural Rights) by contract leads to the infinite regress, it is not possible to disprove them through members of society. That means society cannot decide and contract that we have removed the condition of wisdom and free will from the conditions of the necessity of fulfilling the covenant, and from now on, the crazy, the stupid and the child contract must also be fulfilled.

“The irrationality of positivism” in Nietzsche:

“In fact, around all these positivist systems there fume the vapors of a certain pessimistic gloom, something of weariness, fatalism, disillusionment, and fear of new disillusionment-or else manifest animosity, ill-hummer, anarchy exasperation, and whatever there is of symptom or masquerade of the feeling of weakness.”[2]

““Herbert Spencer”, so enthusiastic in his way, and impels him to draw a line of hope, a horizon of desirability, the final reconciliation of “egoism and altruism” of which he dreams,-that almost causes nausea to people like us:- a humanity with such Spencerian perspectives as ultimate perspectives would seem to us deserving of contempt, of exterminational!”[3]

“It is just the same with the belief with which at present so many materialistic natural- scientists are content, the belief in a world which is supposed to have its equivalent and measure in human thinking and human valuations, a “world of truth” at which we might be able ultimately to arrive with the help of our insignificant, four-cornered human reason!…

That a world-interpretation is alone right by which you maintain your position, by which investigation and work can go on scientifically in your sense, and interpretation which acknowledges numbering, calculating, weighing, seeing and handling, and nothing more- such an idea is a piece of grossness and naivety.”[4]

“Ye sober beings, who feel yourselves armed against passion and fantasy,…

Our question to Mr. Nietzsche:

Mr. Nietzsche, if there is no reality for you, then to whom are you addressing? To imaginary and non-existent people in your own mind, that is? are you crazy?!

Also, if as you said, “there is no “reality””, then the same Statement is not real, either and the Statement contradict itself.

“The belief in “immediate certainties” is a moral naïveté which does honor to us philosophers; but- we have now to cease being “merely moral” men!

Apart from morality, such belief is a folly which does little honor to us!”[6]

Our question to Mr. Nietzsche is:

First, if the axioms which are the bases of man’s “empirical sciences” and his “rational sciences” and also if in your view the “empirical sciences” are not really science and it is foolish to tell them science, are they ignorant and superstitious and untrue? They have no share of reality and correspondence with reality, if so, then why do you think believing in them is useful for human life, and also in your opinion it is necessary. Can it be said that “ignorance, superstition and unreality” are useful for human life?!

Third, one of the unmediated axioms is “my certainty of my own existence”, as Descartes said: “If I doubt anything, I cannot doubt my own existence.” I mean, now that I’m thinking, I “certainly exist” that I think! (Because if I did not exist, I could not think).

Therefore, believing in “my own existence” is no longer a fool’s belief or thought. Rather, if one thinks, “As soon as he thinks, he does not exist or doubt such an existence,” all the wise men of the world consider him a fool or a madman, not someone who says, “I exist now, and my own existent is now an immediate certainty for me.” It is also scientific and certain, always in accordance with reality and honesty.

As the leader of postmodernism, Nietzsche, by questioning the “empirical sciences” and all “rational axioms”, not only questioned “modernity” but also plunged himself and his followers into utter confusion.

[6] Beyond Good and Evil, page 49, Section 34, translation by Helen Zimmern 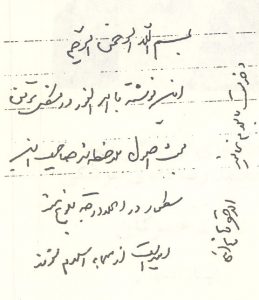 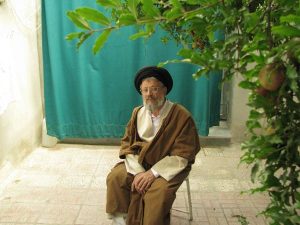